Generally speaking, it is OK to use canned air to help clean paper debris from your printer; however you need to be cautious. If you’ve experienced spilled or leaked toner, canned air is the last thing you want to do as toner dust is very, very fine and you’ll only end up creating a larger mess than you began with. Another instance where you don’t want to use canned air, or at least use it very strategically, is inside an inkjet printer. You may end up spraying globules of ink around the inside of your printer, which may take a long time to either dry or disappear from use.

Canned air is most appropriate for impact printers where you can have paper debris build up over time and collect on the rollers. At American Printer Service, Inc., we don’t recommend using canned air inside of a laser printer unless you’re fairly familiar with the model of printer and know where the different components are. There is a small chance that you’ll actually do any damage to the inside of a printer using canned air during a repair but blowing around all that debris, dust, and toner could cause some problems.

If you notice your printer is looking a little worse for wear, the best thing that you can do is call a professional Technician to come out and give it a thorough cleaning.

Generally speaking, I’d guess if you asked employees at corporations which department is their least favorite to interact with, the HR Department and IT Department are probably pretty closely tied for 1st place. That’s not to say there are not exceptions to the rule but in all the businesses that I’ve worked for, that seems to have been the case.

Most people assume that the personnel in their Information Technology Department are gurus at all things related to computers, including printers. And quite frankly, some are. I’ve come across IT people that I would love to have working at American Printer Service, Inc. but on the whole, IT people usually concentrate their knowledge on resolving computer-related issues. Although many IT people may think they can repair a printer (How hard can it be?) when it breaks, it is best to have a professional Printer Repair Technician, who has been trained specifically in that area, to diagnose and resolve issues.

Printers and computers are two completely different pieces of equipment and both require a different skill set and knowledge base to resolve issues. IT people typically realize this fact, and generally speaking, that is one of the reasons why they do not enjoy it when an End User, who probably knows less about the printer than they do, calls them with an issue. Generally, as far as the IT Department is concerned, fixing printers is like asking an automobile expert to work on a tricycle… Which is not to say that I’m equating printers with tricycles, but I think you get the point. So, the next time you have an issue with your printer, you can take the chance that you’ll happen on a well informed IT person who enjoys working on printers and actually has the knowledge to do so, or you can call use at American Printer Service, Inc. and rest assured that we have professional, factory trained Technicians who can resolve your issues efficiently. 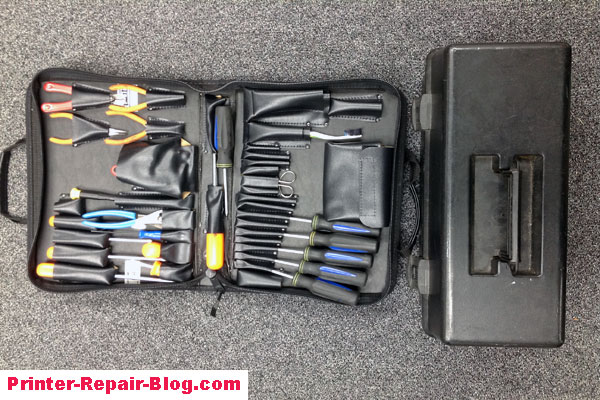 Printers are probably the most often neglected piece of technology in the office. Unlike computers, printers tend to keep to themselves and just continue to work away quietly in the corner or under the desk, never complaining… a gold-star employee! When a printer breaks down though, it can have a crippling effect on your business. As much as the era of the ‘paperless office’ was touted, we just can’t manage to completely do away with printers and paper and many of today’s contracts and important documents are still printed as hard copies.

Here at American Printer Service, Inc. we recommend having a Technician come in at least once every quarter to have a look at the most important printers in your office and give them a little tender loving care. Having your printers PM’d (Preventative Maintenance) every quarter will help insure that your printer is clean and ready to faithfully execute the next print job you send it. A general PM includes disassembling the printer and evaluating all major components. The Technician will advise you on which consumable parts may need replacing in the near future and also tell you if any are due to be replaced immediately. If no problems are found, a thorough cleaning of the printer will be performed before reassembling the unit and placing it back into service. For most laser printers, PM’s take about 20-30 minutes to complete per unit.

American Printer Service, Inc. offers a great rate for performing Preventative Maintenance, and the more printers you’d like to have looked over, the better it gets! Give us a call today or place a Service Request Online to have a printer repair Technician dispatched to your business! 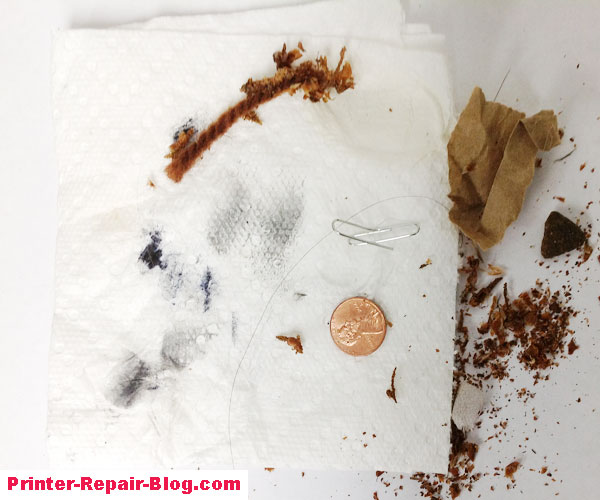 Over the course of repairing thousands of laser printers and dot matrix printers, the Technicians at American Printer Service, Inc. have pulled out some pretty strange things from customers’ printers. I’ll spare you pictures of the most gruesome ones but here are a little collection of things that can find themselves wrapped around and tearing up the gears inside your printer!

Besides the normal collection of dust bunnies, paper debris, and paper clips; our Technicians have found themselves extracting dead mice, dead birds, dog food, cat food, people food, money, mysterious colored fuzz, and all sorts of other things! It is actually pretty amazing to see what can be dropped into a printer before it grinds to a screeching halt!

I’m sure some of you have some horror stories to share about things you’ve dropped into your printer and then sheepishly had to watch a Technician fish out so share with us! And, if you’re one of those people who just happened to drop an item into your printer and need it retrieved, give us a call! Just don’t forget to throw in your spare change… our Technicians like finding cash!